16 Foods That Banish Bloat Once and for All 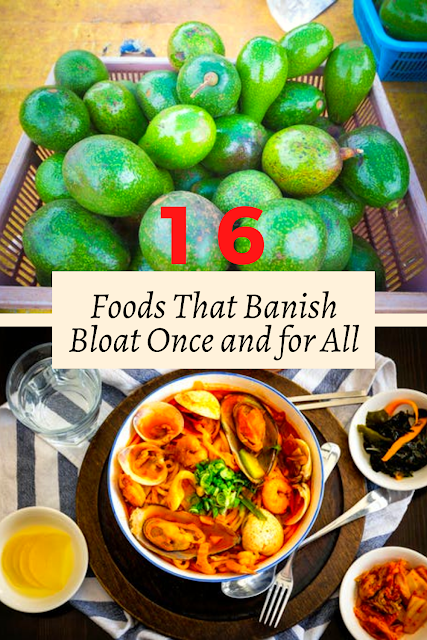 'Cause nobody wants to deal with a puffed-out belly.

1. TOMATOES
These super low-cal fruits are rich in potassium, which helps rid your body of belly-bloating sodium. Plus, they've been found to reverse leptin resistance. Since leptin helps regulate your appetite, it's important for your waistline that your body produces adequate amounts.

3. BANANAS
They may feel heavy, but bananas do not make you gain weight. Quite the opposite: They're loaded with filling fiber and potassium, which helps relieve water retention.

4. OLIVE OIL
Though it's not scientifically confirmed, there's some evidence that small amounts of olive oil may help reduce belly fat. That's because it contains a chemical called oleic acid, which helps break down fat in the body.

5. ARTICHOKES
A medium-size one has 7 grams of fiber — almost 30 percent of your recommended daily allowance — to help your digestive system chug along properly.

6. KIMCHI
This Korean staple is a prime example of a fermented food — others include sauerkraut, pickles, and tempeh — meaning it's filled with probiotics to help boost good, digestive-tract-healing gut bacteria.

8. OATMEAL
The secret ingredient? Fiber, which helps keep you full without puffing you out. Sprinkle on cinnamon and breakfast is served.

9. APPLES
An apple a day keeps the doctor and the pounds away. A recent study found that noshing on an apple before a meal may help you eat less later, thanks to its filling fiber.

10. BERRIES
Hello, summer! Berries are full of fiber and antioxidants, plus they're low-cal. Eat them solo or use them as a topping for yogurt or cereal.

11. ALMONDS
Almonds are loaded with protein, making them a great afternoon snack. Just be sure to stick with the natural kind, and limit yourself to a one-ounce serving (about a shot-glass worth).

12. EGGS
All the latest science shows that having two eggs for breakfast can help you eat less throughout the day. That's because they're filled with protein, which wards off the urge to nosh.

13. FENNEL
Because fennel relaxes GI spasms after eating, you can prevent the gas and bloating you'd typically have after a heavy meal. Either chew on the seed or make fennel tea.

14. HONEYDEW MELON
Cantaloupe isn't the only melon with de-bloating powers: Honeydew is also packed with potassium, which helps get rid of all the extra sodium that's making your tummy puff up.

15. PINEAPPLE
Everyone loves pineapple, but did you know the tropical fruit is the only source in nature to contain the enzyme bromelain? According to the University of Maryland Medical Center, it's been used for centuries to treat indigestion and reduce inflammation, making it an incredibly tasty way to get rid of bloating.
Facebook Twitter