11 Low-Calorie Beers You Should Actually Be Drinking On St. Patty's Day 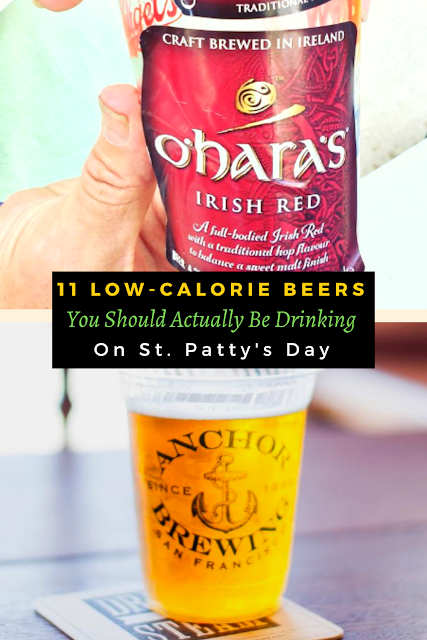 Skeptical about the slogan "Guinness is good for you?" It's actually better for you than a lighter-looking wheat beer. "If you're choosing a brew based on how it'll impact your weight, wheat is not the way to go," says former Biggest Loser dietitian Cheryl Forberg. A typical 12-ounce glass of wheat beer has 150 to 176 calories and 13 grams of carbs. Most light beers, by comparison, have about 100 calories and 6 grams of carbs. Here are the 11 brews you should be drinking this St. Patty's Day if you want to cut calories.

1. Guinness Draught
Even hearty Guinness Draught is a slimmer pick than your standard wheat variety, with 126 calories and 10 grams of carbs. And think about it this way: "Slashing 40 calories each time you fill your mug might not sound like a lot, but over time, these small changes help people achieve their weight-loss goals." Meaning you can have your beer and lose weight, too.

3. Omission Lager
If you're gluten-free and looking for a lighter hop, Omission's Lager extracts the gluten out of malted barley to make a refreshing and safe beer alternative for those with intolerances. Not to mention, it boasts only 140 calories per 12 oz. serving.

4. Abita Purple Haze
The funky bottle of Abita's Purple Haze isn't the only thing you'll want to brag about – an American beer mixed with raspberry puree, it lays low at only 128 calories.

5. Bard's Sorghum Malt Beer
Another gluten-free option, Bard's beer is made with malted sorghum for a sweet flavor that has only 155 calories per bottle.

6. Grolsch Pilsner
While pilsners might be one of the most complicated beers to brew, they're certainly not the most unhealthy. This option from Grolsch only has 145 calories per bottle, so you can sip away this St. Patty's Day.

7. Miller 64
A tried and true classic, Miller's 64-calorie beer will let you enjoy more than one brew without any guilt.

8. Sam Adams Light
Sure, it might seem like heresy to crack open a traditional American beer on the day of the Irish, but when it only has 119 calories per serving, you can't really complain.

9. Amstel Light
It's not fancy, but it definitely goes with good food, and isn't that what matters the most? Oh – and it has 95 calories per serving.

10. Anchor Brewing Company Anchor Steam
Maybe not the lightest beer of all, but better than something that's essentially a meal. This beer comes with just 153 calories.