12 Ways To Maintain Your Weight Loss 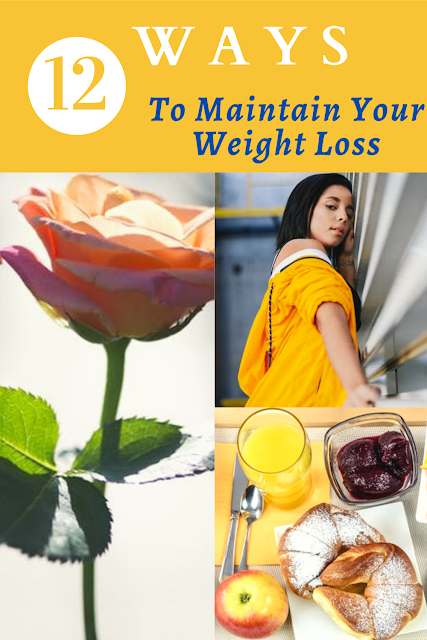 Losing weight takes much more out of you than just excess fat and pesky pounds; it takes blood, sweat, and tears on top of that. And once you've made it out with your goal body and your ideal weight, all that discipline and sacrifice has taken a toll. The last thing you want to do after so much work is to keep working, but just because you've hit the finish line doesn't mean you can stop running yet.

In fact, if you don't put just as much time and effort into keeping off the weight you worked so hard to lose, the odds that you'll gain it right back are overwhelming. According to a Stanford University study, only 5 percent of people successfully maintain the loss they've made. That's why we've rounded up these surefire solutions to help you keep on keeping it off. And if you want to do more than just maintain and lose even more, we've got ways to overcome weight loss plateaus as well.

1. Go Big
Turns out there's a magic number when it comes to weight maintenance: 15! When pharmaceutical company researchers from Novo Nordisk Inc. studied weight watchers, they found that losing 15 percent or more of your body weight meant you were more likely to keep losing over time. Less than 19 percent of study participants who'd lost this much regained that weight after a whole two years. So cut according to your calculations and give your body a better long-term chance.

2. Don't Diet
Brace yourself, this one's hard to hear. According to University of Pennsylvania researchers, nearly 65 percent of dieters regain the weight they've lost before just three years have gone by. Instead of being discouraged by those numbers, use this as a reminder that you shouldn't be dieting, but living a healthy lifestyle instead. It's much easier to continue counting calories and shopping mindfully than it is to keep on cutting carbs completely or stopping sugar altogether. Stick to a weight-loss routine that you can continue even after you've reached your goals without torturing yourself.

3. Go For Flavanoids
According to a study in the British Medical Journal, middle-aged and older people who ate flavonoid-rich diets were more likely to maintain their weight than those who didn't. Wondering what flavonoids are and how to get your daily dose? Lucky for you, these antioxidants are found in all kinds of fruits and veggies, ranging from sweet potatoes to blueberries to romaine lettuce. As if you needed another excuse to stock up on these food groups the next time you hit your local grocer's produce section.

4. Don't Choose Change
Change is good—but not always. When it comes to picking what goes on your plate, consistency is key. In fact, a study in the American Journal of Clinical Nutrition found that the majority of people who lose weight and keep it off stick to the same eating habits whether it's a weekday or a weekday. So don't veer from a good thing; holding onto these healthy habits long-term will make for long-term results.

5. Step On The Scale
When was the last time you stepped on the scale? If it wasn't anytime today, you should probably get to it. Just because you like the number that's on the scale now doesn't mean you should stop checking. it When participants in a Cornell University study were pushed to lose 10 percent of their body weight, those who did so in the first year kept the pounds off for a second year as well. Researchers think these results had to do with how often they stepped on the scale because this action reinforced the decision they'd made to eat clean and exercise regularly. And if you won't take our word for it, trust the peer-reviewed journals this advice comes from.

6. Don't Ditch Your Routine
Whether it was a gym membership or a yoga mat that helped you stay active and slim down, keep it up! If you stop working out after weight loss, you'll experience a metabolism dip, according to researchers from the University of Alabama. And as obvious as that sounds, you'd be surprised at how many choose to throw in the towel as soon as they reach their goal. Yes, you can celebrate and relish in your success, but those 5 a.m. jogs that got you to 130 pounds are going to keep you there, too! This study found that people doing 40 minutes of cardio or lifting three days a week kept burning calories at the same rate. Just make sure you're using the right protein powder after those sweat sessions.

7. Or Miss Your Morning Meal
It's not an old wive's tale; breakfast really is the most important meal of the day. What do nearly 80 percent of the National Weight Control Registry members have in common besides losing an average of 66 pounds and keeping it off for over five years? They regularly eat breakfast. So pop an English muffin in the toaster or rip the lid off of that Greek yogurt. By getting started on the right foot, you'll set the trend for the rest of the day.

8. Keep Calories Low
When a study in the American Society For Clinical Nutrition looked at those same National Weight Control Registry members, they found that their weight loss success stories had even more in common. Their secret? A daily diet low in both calories and fat. If you choose to follow along with this, make sure the fats you are eating are healthy ones like avocados, almonds, or peanut butter. And when it comes to your calorie count, be just as diligent in your tracking as you were back in the beginning before you shed those pesky pounds. Otherwise, they'll come sneaking right back.

9. Stay In Control
Instead of indulging in massive cheat meals to make up for every hard-earned calorie you cut on your weight loss journey, enjoy the sweet stuff in moderation. That same study found that lower levels of dietary disinhibition—a.k.a. periodic binging—were linked to a 60 percent higher chance of maintaining weight for over a year. With a number like that, what other incentive do you need to keep your urges under control?

10. Choose To Chew More
When Harbin Medical University researchers studied people's chewing habits, they found that the way you physically eat your food has more to do with weight loss than you might think. In fact, people who chewed each bite 40 times consumed about 12 percent less food than those chewing only 15. That's because your brain doesn't immediately register that your stomach is full, so slowing down gives you time to realize you aren't hungry anymore. You can also try putting your fork down between bites as well, or even eating with chopsticks.

11. Manage Your Mood
Is Your Diet Making You Depressed? It's possible some of your favorite foods are contributing factors to your mood swings, so cut those culprits from your grocery list as soon as possible and take any other measures needed. Otherwise, your depression may make maintaining weight loss a serious struggle. A study in the American Journal of Clinical Nutrition found lower levels of this were related to greater success in keeping the pounds off.

12. Keep Clutter-Free Counters
Out of sight, out of mind, right? If you don't walk by the freezer section on your shopping trip, you're far less likely to pick up a pint of mint chip, so keep that in mind when it comes to kitchen organization. Resisting temptation is hard enough already without salty snacks and sweet treats staring you in the face every time you walk to the fridge. In fact, Brian Wasnink, director of the Cornell Food and Brand Lab, found a link between a woman's weight and the food she leaves sitting out. Women with soda on their counters weigh an average of 26 more pounds than women with spick and span spaces, and those leaving cookies out are generally 8 pounds heavier.
Facebook Twitter