Home/ Weight Loss/12 Simple Ways To Cut Back On Carbs

12 Simple Ways To Cut Back On Carbs 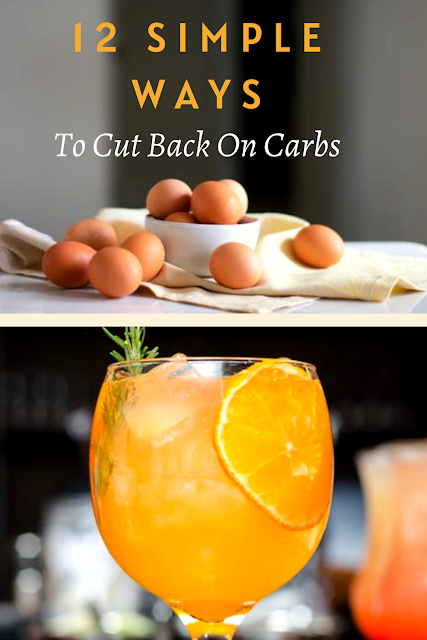 Believe it or not, carb cutting doesn't have to demoralize you. When you try some of these sneaky shortcuts, you won't even realize you're limiting your intake.

Nobody said losing weight was easy, but a lot of people make it harder than it has to be, especially when it comes to cutting carbs. Just because you're looking to slim down doesn't mean you need to torture yourself by removing them from your diet cold turkey. Not only is it possible to cut too much and deprive yourself of energy, but going from daily bagel breakfasts to no bread at all can cause massive carb cravings.

Instead, how about incorporating healthy hacks a little bit at a time to get yourself used to a life with less of the starchy stuff? You don't need drastic measures, just some of these simple steps we've rounded up that'll push you towards progress with changes you can handle.

1. Viva La Veggies
The first thing you thought of when you considered cutting carbs was probably all of the creamy, delicious pasta you'd be cutting out of your life. With visions of Olive Garden dancing in your head, you ultimately decided a low-carb diet just wasn't for you. But what if you didn't have to wave goodbye to your favorite wavy noodles? By purchasing a spiralizer and some ripe zucchinis, you could be scarfing down plates of guilt-free veggie pasta in no time.

2. Think Thin
It's hard to imagine a life without bread—cream cheese would be rendered obsolete, not to mention peanut butter and jelly—so it's a good thing you don't have to. There's a way to keep your beloved bread products in your life even if you're carb cutting; next time you're at the grocery store, just look out for thinner slices. Bagel "thins" and Arnold's sandwich "thins" (pictured above), true to their name, provide a base for your favorite breakfast and lunch staples while slashing carbs and calories.

3. Cut Your Crust Intake
If you love pizza too much to abstain, at least ditch the deep dish. By going for a thinner crust, you'll get the taste you love without sacrificing an unnecessary amount of carbs to get it. Not only that, but you'll also be reducing your refined white flour consumption. This primary crust ingredient, which made it onto our list of The 22 Worst Carbs In America, can leave you wanting more when it spikes your insulin levels.

4. Cue The Cauliflower
No rice? No problem. For a tasty side that meets your carb-cutting standards, replace your usual mound of white rice with cauliflower rice. The chopped veggie may look the same and have a similar texture, but the comparisons stop as soon as it enters your body. Because it's nutrient-rich and low-carb, you're free to go for seconds without widening your waist.

5. Don't Give Up On Toast
For those of you who are dedicated to this diet change with just one exception, don't worry. You don't have to give up your avocado toast. Instead, get creative with sliced sweet potatoes and use them as a base fresh out of the toaster. You won't miss your crunchy whole wheat, trust us. You'll just wish you'd thought of this before.

6. Make Smoothies Less Sweet
If you kick every morning off by drinking a freshly blended green smoothie, that's great and we applaud your efforts—but there's always room for improvement. Bet you never thought about all of the carbs you were chugging when you dumped a bunch of frozen fruit into the mix, but the sugars found in your fave fruits act as carbs in your body. So start tweaking the ratio and replacing some of these with veggies like spinach, carrots, or kale for a lower-carb breakfast beverage.

7. Stick To Celery
Peanut butter toast—whether you left that childhood favorite in the past or still slather that spread on whole wheat every morning before work, there's a better way. Reach for sticks of celery instead. You won't just be slashing your carb levels, but ridding yourself of a major morning calorie count as well. We recommend subbing in some almond butter while you're at it for some seriously nutritious noshing.

8. Have Half
Crazy idea here, but how about the next time you have a sandwich, you only use one slice of bread? Think about it: If you order a whole wheat with turkey and cheese from Subway every day, eating it open-faced will save you close to 150 grams of carbs a week. Talk about a simple change with not-so-simple results.

9. Cut The Cocktails
Not the drinks, anything but the drinks. You'll cut carbs everywhere else, but the rich, sugary cocktail menu staples are where you're going to have to put your foot down, right? Wrong. With a simple swap, you don't have to avoid alcohol altogether to avoid carbs. Keep things simple by ordering your drink on the rocks or getting a glass of wine. Don't believe us? Read up up on these healthy hacks and the other boozy beverages Diet Experts Order At The Bar.

10. Banish The Bread
So you mastered the art of the open-faced sandwich, but you still aren't seeing the results you want—looks like it might be time to remove the bread from the equation altogether. Really cut back on carbs by whipping up some meat and cheese roll-ups. You'll still pack on the protein without cramming in the carbs.

11. Go Yellow
Bananas to the rescue! Banish carbs by getting creative in the kitchen with one of our favorite fruits. Use slightly underripe ones to make "nice" cream that the scale will love just as much as your sweet tooth. Then mix any leftovers with eggs (two per banana) for yummy pancakes you'll flip for.

12. Wrap It Up
You already put lettuce in your burgers and tacos, so why not use one of the crisp leaves to hold everything together? That's right, throw out your buns and shells the next time you start grilling. You'll be ridding yourself of the 20 grams of carbs found in a single Pepperidge Farm hamburger bun and the 24 in a Mission flour tortilla. And since there's only one single gram of carbs in an entire cup of lettuce, your simple swap will go a long way.
Facebook Twitter