Are Low Carb Diets Hard To Stick To? 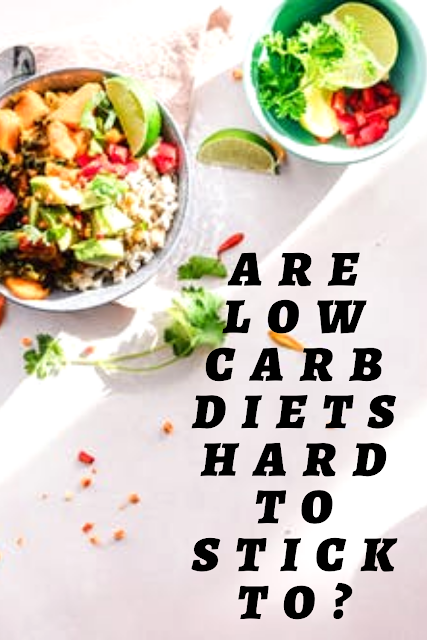 Have you tried a low carb diet for one day and ready to throw in the towel? Do you feel totally deprived of your favorite foods?

Many people can’t imagine a day without bread, whole grains or some kind of sugary confection.

While you need to limit many of these processed foods on a diet in order to lose weight, following a low carb diet, however, is not as hard as you might think.

Eating a low carb diet can actually work in your favor by reducing your appetite and automatically lowering your caloric intake.

If you are attempting to lose weight by simply cutting back on calories, but still eating the same foods, your brain will respond by triggering your ‘hunger’ button, making you feel miserable and frustrated.

Studies show that when you compare low fat diet to low carb diets, calories are restricted in the low-fat group, while those eating low carbohydrate foods, they can eat as much as they want to.

Studies continue to confirm this fact when comparing the efficiency and effectiveness of various eating plans.

Another important factor that is measured is compliance rates by those participating in their diet plan.

When comparing a low carb, ketogenic diet with a low-fat diet in a clinical trial, there were 120 hyperlipidimic and overweight individuals divided up randomly into two groups.

For six months, 51 overweight or obese individuals were placed on a low carbohydrate diet. 41 completed the study giving a compliance rating of 80% (2).

For six weeks, 106 overweight, Rome council employees were placed on a modified low carb, ketogenic diet. The compliance rate for this group was 83.6% (4).

Another study was completed involving 311 pre-menopausal women who were overweight or obese.

Following a low carb diet is not any more difficult to follow than other ‘diet’ plans.  In fact, in many cases, the compliance rate is quite high.

All of this may depend on a few factors, such as where you live or cultural practices. Eating a low carb diet is my favorite method for achieving successful weight loss. It is not the only option available, however.

The BEST eating plan, exercise program and improvements for your health is what works best for you.  You must find a plan that works for you and that you will follow for best results.

The greatest advantage of a low carb eating plan is that you will not be hungry.

Feeling hungry is frustrating and your willpower does not stand a chance against hunger.

When you are hungry, you eat – it is as simple as that.

Who wouldn’t want an eating plan that can help you lose weight successfully without feeling hungry ?  With that criteria – I am all in.
Facebook Twitter