7 Food Myths That Cause Weight Gain 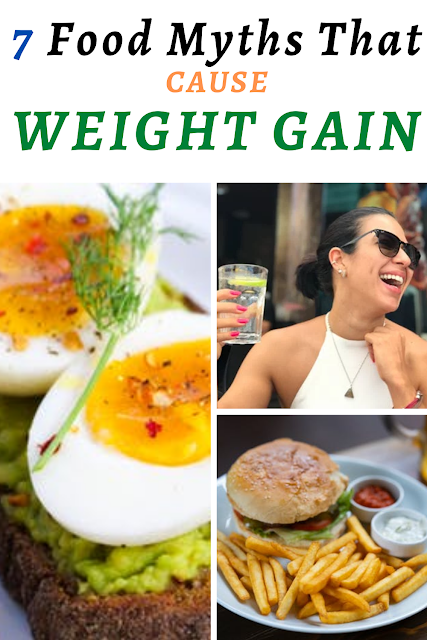 You can't believe everything you hear, especially when your health is at stake.

Being gullible can get the best of us into trouble. And when it comes to watching your weight, if you naturally trust in every tip or trick you hear whether it's from your best friend or a product label, you're setting yourself up for some serious scale issues. Blindly believing without asking questions or doing your own research is one of the easiest ways to set those numbers at a standstill or send them in the opposite direction.

Forget everything you thought you knew because we've rounded up a few tried-and-not-so-true weight loss hacks. For instance, did you know that it's possible to overdo it on the healthy stuff? That's just one of the 20 Weird Reasons Why You're Gaining Weight So Fast. Sometimes the secret to slimming down isn't based on what you need to do, but what you need to stop doing, so get ready to ditch these debunked diet myths.

1. You make the gym your home.
If you spend more time on the treadmill or in tree pose than you do at home, believe it or not, that's a problem. It is possible to have too much of a good thing and you could be preventing progress by overdoing it in the gym. While a regular workout routine is important for weight loss results, it's just as important that you're giving your muscles time to recover. It's not only that they won't be able to lean out with nonstop exercise, but they'll be more susceptible to injury. So slow it down and keep things steady; your transformed torso will thank you in the long run.

2. You're mindfully eating.
There's nothing wrong with paying attention to the food you allow into your body, but while mindful munching is generally a good thing, it can backfire. Stress in any area has been linked to weight gain because of the release of cortisol and ensuing insulin production, which slows metabolism, according to a study in Biological Psychiatry. So if you've taken your calorie counting too far and are starting to obsess, take a step back. You might just be doing your body more harm than good.

3. You Snack Between Meals
Don't force food on yourself if you aren't feeling it. Bringing a protein bar or bag of nuts to work is fine if you start craving a little something before your lunch break hits, but don't think it's necessary. Some people think eating more frequently is the key to weight loss, but according to a study in Hepatology, people who divide their calories into three small meals with snacks in between actually develop more belly fat than those eating the same amount of calories in three meals.

4. You Choose Sea Salt
Have you ever wondered why it is that you reach for sea salt shakers at the grocery store over the regular table salt? You were probably told somewhere down the line that it's a healthier option but think again. The only difference, besides the higher price, is that sea salt comes from evaporated ocean water while the other kind is mined. The magnesium and iron in sea salt are only significant if consumed in dangerously high amounts, or that both variations contain the same 2,300 milligrams of sodium per teaspoon. So save your money and walk out with the traditional stuff. It's fortified with iodine, which is essential for your thyroid gland to function properly; otherwise, it may become inactive and lead to weight gain. Looks like table salt is your best bet—in moderation, of course.

5. You only drink water.
It's no secret that when it comes to healthy hydration, H2O reigns supreme over all over drinks. That being said, don't miss out on a cup of morning joe or green tea because you're too busy slugging back a bottle of water. Green tea is a metabolism-boosting beverage and, as long as you limit the sugar or sweetener you're spooning in, coffee can be as well. A study in Physiology and Behavior found a higher average metabolic rate in caffeinated coffee drinkers over decaf.

6. You get rid of the yolk.
Opting only for egg whites doesn't mean you've cracked the code. In fact, the opposite is true. By throwing out half the egg, you're not just missing out on half the protein (yes, there is egg protein in the yolk), but on all the healthy fatty acids and micronutrients like immune-boosting selenium and B-vitamins. We know you may have heard that the yellow interior of this beloved breakfast item is where the cholesterol lies, but dietary cholesterol doesn't have an impact on blood cholesterol levels. In fact, researchers from Wake Forest University found that there isn't a link between heart disease and egg consumption. Looks like you should be saying yes to yellow.

7. You're eating a lot of protein.
Everything in moderation, right? True, but that's not just a rule for sugar and sodium consumption—it applies to the good stuff as well. So instead of simply shoveling in protein, put some thought into it. Otherwise, you could be eating an excessive amount of protein that's not boosting your muscle mass, but actually getting stored as fat. This might be why a Clinical Nutrition study found high-protein dieters are 66 percent more at risk of dying than those eating less protein. Your body can only handle about 30 grams protein max in one sitting, which you can easily reach with one shake, depending on the brand.
Facebook Twitter