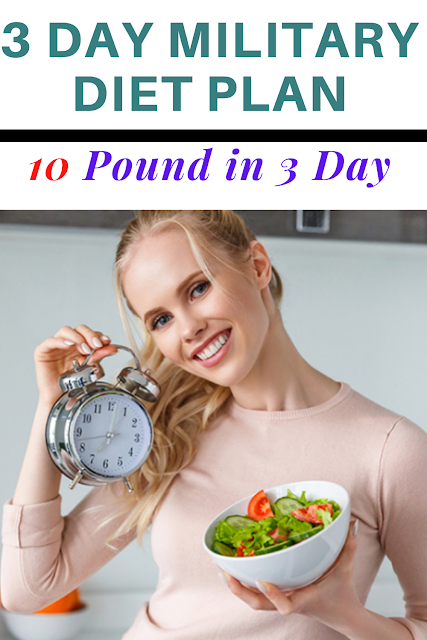 Are you looking for a quick weight loss plan? Don't go too far, you might find your way to a "military diet", which is also called a "three-day diet," "a marine diet," "an army diet," or an "ice cream diet" and other names.

The military diet is said to be designed by US Army nutrition experts to help soldiers gain proper weight as quickly as possible in order to always maintain the health and fitness of the military, but there are those who contradict these words altogether and in detail, and he says that this diet is not related Neither the military, nor the army, nor the government, and the character of the military is only for the sake of adhering to the diet in a strict and organized way.

the military diet is a short-term, low-calorie diet, fairly easy to apply, because it does not prevent any type of eating, does not impose certain expensive foods, does not need to buy a book to apply it, and changes in habits are not required for a long time.

The military diet plan includes a three-day diet, followed by a four-day vacation, and this path is followed again and again until the desired weight is reached.

* How is the Military Diet Plan Implemented?

The military diet is divided into two stages that last for seven days. In the first three days, a strict low-calorie diet must be followed that includes major meals, breakfast, lunch, and dinner, but without eating snacks between those meals, provided that the total energy consumed is between 1100 to 1400 calories per day.

As for the second phase, which extends over the remaining four days of the week, it has less strict restrictions, but healthy food must be taken with regular maintenance to keep the daily caloric intake low.

* What are the details of the military diet plan?

As we mentioned above, the plan includes two phases: the three-day phase and the four-day phase
.
Three days stage

The first day. The total calories on this day are 1400 calories.

The second day .. The number of calories consumed reaches 1,200 calories.

The third day .. and the number of calories is about 1100 calories


It is worth noting here that during this stage it is possible to drink coffee or tea as desired, provided that no calories are added from sugar, cream, or milk, with a lot of water and exercise.

Also, it is allowed for those who suffer from food restrictions during this stage to choose alternatives to the foods mentioned above, but they must contain the same amount of calories, for example, those who complain of sensitivity to peanuts can replace them with almond butter, and vegetarians can replace the tuna with almonds.

Here a person has complete freedom to eat any food, and snacks can also be eaten between main meals, but it is very important that the daily intake of energy remains less than 1500 calories.

* Questions related to the military diet

The first question. Is the military diet based on evidence?

There are no studies conducted on the military diet. All there is that its supporters claim that it has an advantage is that the food combinations in it increase the metabolism rate and contribute to fat burning, but on the ground, there is no concrete evidence to support such allegations, and it is true that the military diet can help to lose weight because it is low in calories, however, as of this writing, it does not have a special advantage that makes it more effective than other slimming diets based on caloric restriction.

The second question .. Does the diet really allow the loss of five kilograms a week?
The military diet has become popular, and it is very popular because of its ability to lose weight in a short period. In theory, this rate is possible for people who are overweight and work to reduce the amount of calories strictly, but we must know that most of the weight missing is water and a little muscle, not the result of losing fat, but rather due to restriction of sugars and calories. Hence, the recovery of lost weight can begin by eating normally again.
The third question. Is the military diet safe?
In general, it can be said that the military diet is somewhat safe for the normal person in the event of being followed from time to time and for a short period, while walking on it for consecutive and long months may expose the body to a lack of some of the necessary nutrients, and in addition to this, eating hot Doug, biscuits and ice cream every week may cause metabolic disturbances. Perhaps the greatest danger in the short term to the military diet is binge eating, which makes restoring the lost weight inevitable if you continue to eat more food without being counted, Frankly, according to instructions The American Academy of Food and Nutrition recommends that you lose 1 to 2 pounds a week at most to get safe results. Otherwise, a military diet will put you at risk. No escape is the restoration of lost weight once the diet is stopped.
The fourth question. Is it possible to follow a military diet for a long time?
If you want to quickly lose some extra kilograms of your weight, this system may help, but it is very likely that you will recover what you lost very quickly as well, from here it is not possible to follow a military diet for a long time in order to lose weight, if you really want to lose Too much weight, and in maintaining it, there are many ways to lose weight better than a military diet
If you see that this article helpful don't forget to share it in your military diet board in your Pinterest account
Source: http://www.cuisineoz.com/2019/09/military-diet-help-you-to-lose-10-pound.html?m=1
Facebook Twitter